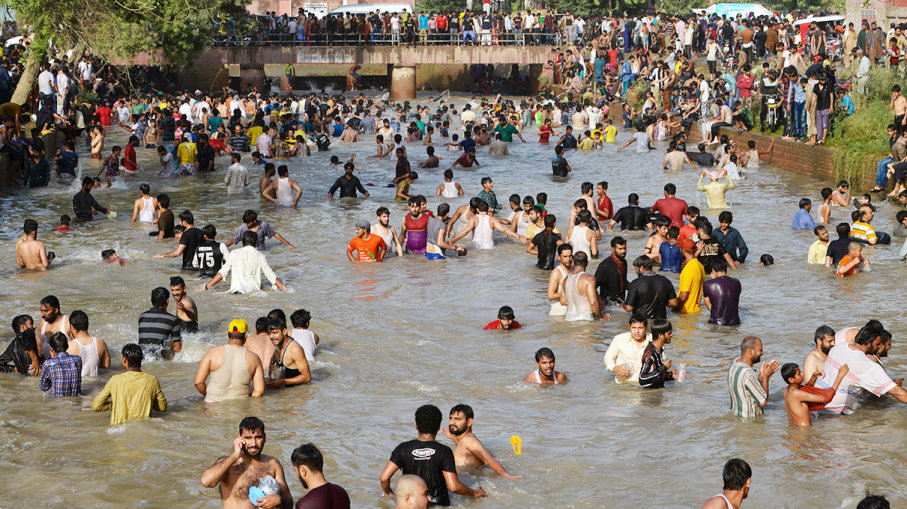 On 8 November 2018, at the National Library of Martynas Mažvydas, we had a meeting and discussion “Living in the Overheated World” with Thomas Hylland Eriksen, Professor of Anthropology at the University of Oslo. The event, which was part of the programme “Transcending Europe”, was organized together with the Nordic Council of Ministers Office in Lithuania. In 2011 Professor Eriksen was honored for the outstanding academic achievements by a grant from the European Council of Science and conducted a study “Overheating: Three Globalization Crises” in 2012-2017, which analyzed the negative processes of globalization in the areas of economics, finance, environment, climate and identity. These and other aspects of the “overheated world” were discussed at the public event. Here is an overview of the ideas that the professor presented in his lecture. Diagnosis. Overheated world.

The world is constantly changing. This is a rule of history. True, since the 19th century, the pace of change has speeded up immensely. What’s more, it is constantly increasing because we keep pushing the accelerator pedal more and more heavily. The real sprint run began around 1991. This is the boundary that marks the end of the Cold War, the victory of Western civilization in confrontation with the Soviet Union, the proliferation of the neo-liberal economic model, the increasing use of computers and (a bit later the Internet era) as well as the new expansion of globalization. Thus, 1991 is a certain borderline when we started talking about the modern world by using terms such as “over-hasty”, “too intense”, “overcrowded”, and “over-filled with various things and activities”. Every day our life is filled with new signs of overheating, and, unfortunately, no one can control or change this process, since we are forcing the world of the 21st century to move faster and faster in an engine without a thermostat.

Therefore, it should not be surprising that some people living in the heated world are tired of change and are beginning to repeat: “Enough! We want all this to end!” Citizens of Venice and Barcelona say this when they see their cities simply besieged by tourists. These words are repeated by people living near the oceans, who realize that soon there will be more plastic in the water than fish. Yet another obvious problem of the overheated world is that people living in such a world are not only feeling “It’s just all too much”, but they are also beginning to realize that they can’t influence almost anything. As a rule, fateful decisions over people in the overheated world are taken somewhere far away (in Brussels, Washington, etc.) without considering the voices and opinions of the people whose lives will be affected by these decisions.

In this new world, which came into existence after 1991, unfortunately, the sources of old tensions and conflicts (not necessarily related to the societies that exist at different levels of time flow) have not disappeared. For example, the genocide in Rwanda and the war in the Balkans have revealed that the above-mentioned changes did not automatically solve the old problems; even more, the “heated” world intensified some old conflicts. What should small societies living in the overheated world do? How do global issues affect local phenomena? How can something be global and local at the same time? Representatives of small societies are intensely experiencing both constructive and destructive aspects of life in the heated world. If small countries like Norway or Lithuania want to maintain and develop their language and culture, they need to support these spheres, and mechanisms of market economy would not be appropriate in their case. For example, literary translations into national languages ​​are a very important field of activity. Small societies must take over from the world what is best in the fields of art and academia by translating and publishing books in Norwegian and Lithuanian. Support is also needed for theater and music. If we do not receive support for taking over creative works from the world and diffusion of our own creative works, we will engage in transnational popular culture, but will refrain from our own diversity. This will impoverish not only small societies living in a globalized world, but also this world will lose some of its colours.

Of course, not only culture, but also economy is important. As a rule, small societies in the global economy are trying to find their niches that are not yet occupied by others and sell what is still not offered by other market players. Sometimes such a product becomes an experience. “Come to us and gain some unique experience!” This exclusive “product” is offered to tourists by residents of the Seychelles. Others are trying to do the same thing. There is no doubt that in Lithuania it is also possible to get some unique experiences that are not possible elsewhere. They cannot be multiplied, copied, or moved to another space. It is obvious that these unique experiences are important not only as a driving force or product of tourism, but also as an integral part of Lithuanian (or other nation’s) identity. Therefore, we must protect them while living in a globalized world by balancing between being rooted in a particular place and being mobile. The third lesson to be learnt for those who want to survive in the overheated world is to find friends and allies, as well as initiate collaborative processes. Working together instead of competing is a fruitful strategy in the global world.

How to put up with the sense of uncertainty and fear? In the overheated world, there are many conflicts inspired by the universal operation of global modern forces and the desire for autonomy in communities of some specific locations. Globalization hides many of the tensions caused by the rapid economic development and the destructive processes in our ecosystem that result from this development. These processes and many other phenomena reveal that the global system is unstable and contradictory. Understanding this situation provokes feelings of uncertainty and fear. Today, we do not believe anymore in the progress that seemed to be unquestionable thirty years ago in the western and eastern worlds when a “new world”, “new order”, “new man”, and “new life” were being created. Progress had changed religion, but now the situation is different. What are the future prospects ahead of us?

People are afraid of the future, so they vote not “for”, but “against”. Meanwhile, politicians in Europe and other countries are trying to sell us not the vision of a good life or the hope associated with such a vision, but the fear of the future, along with the theme of “returning back” or nostalgia. In general, in the postwar era of optimism, politicians would use the following scheme: “Now we are at point A, but after 20 years we will be at point Z, of course if you vote for me and my party! It will be very difficult, we will need to mobilize all the forces, but we will achieve our goals!” Now we commonly hear quite different words from politicians: “You must vote for us because otherwise things will go in a very bad direction…”

US President Barack Obama was different from this type of politicians because he talked about hope. Obama kept repeating: “Yes, we can!” However, this politician never said what he and his voters could do. To overcome fear, we can think of a new positive vision for our community and society, the state, Europe, and humanity. We are currently facing so many challenges that will be very difficult to overcome without a vision. Ecology, immigration, inequality, and hate speech are just a few issues, but these are very serious challenges related to the many controversies of our present-day life. Obviously, we will have to agree on how and what we need to do in the near future, since otherwise the world will continue heating up and politicians will continue selling fear.