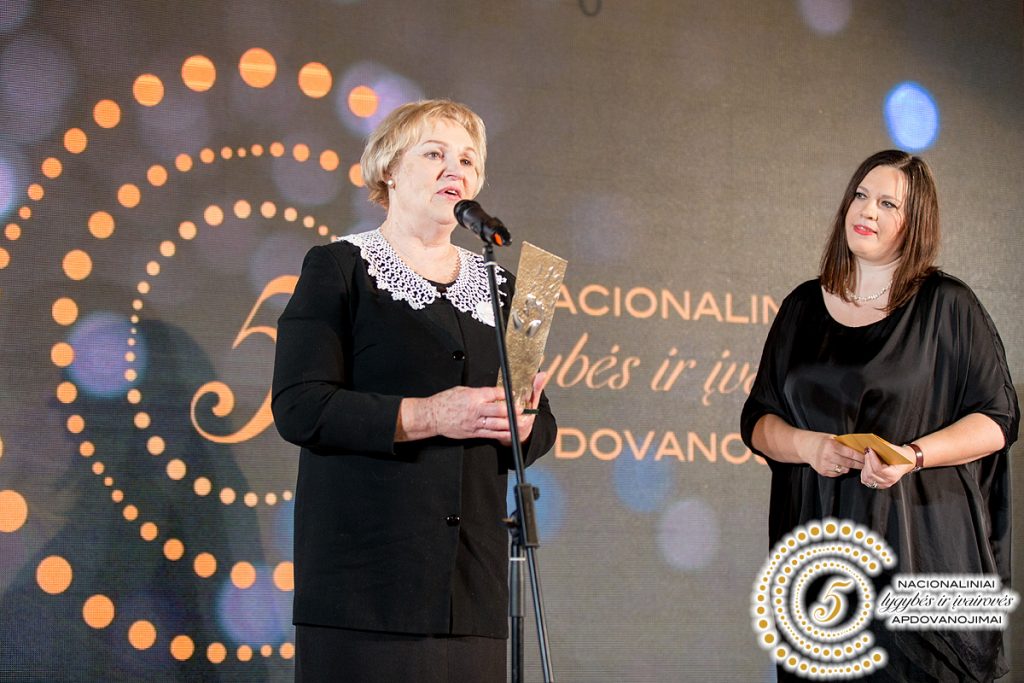 On 22 March 2018, the National Equality and Diversity Awards were solemnly presented at the Royal Palace. The Commission and the people who voted on the Internet rated best those individuals, organizations and initiatives who worked in the area of human rights in 2017.

Equal Opportunities Controller Agneta Skardžiuvienė believes that the nominated people are the pride of Lithuania. “It is their work that makes our daily lives more democratic. And no, this democracy does not arise by itself: it requires a lot of work, courage, mental and financial resources, not to mention strong will, which the nominees definitely do not lack,” ascertained she.

People and their projects were ranked in eight categories: The annual Breakthrough Award was presented to Erika Račkytė. She was one of the first to talk about sexual harassment. The actress turned to law enforcement, and the director who violated her rights was dismissed. By wearing black, the ceremony guests expressed their support for the #MeToo movement and the women who were victims of sexual harassment.

The Gender Equality Award was presented to the Network of Specialist Aid Centres. The specialists of these organizations provide legal and psychological assistance to victims of violence in the immediate environment. Last year, around 12,000 people received their help.

Henrika Varnienė, Director of the Lithuanian Forum of the Disabled, was presented with the Award for Overcoming Obstacles. She was awarded for her contribution to the discussion on the change of the employment system for people with disabilities, and the dialogue with the Ministry of Health regarding the poor quality of compensated means of medical treatment.

Vytautas Raskevičius, Human Rights Policy Coordinator of the LGBT Rights Association, received the Rainbow Award. The activist won the laureate for his consistent work in representing trans-gender individuals and in improving the practice of Lithuanian courts in changing identity documents.

The Open Society Citizen Award was presented to journalists from the Širvintos regional newspaper “Širvis”. Regardless of the hostility of local authorities, Andželika Bagočiūnienė, Janina Pukienė and Valda Patinskienė created and supported an independent information space by giving the floor to those who would otherwise have remained voiceless.

Gita Mickevičiūtė and her project “Senelių darželis” received the award “The Best Age is my Age”. This day care centre established in Alytus reduces the exclusion of hard-moving and thus isolated old people by involving them in social, creative and cognitive activities.

The Polish Dialogue Club was awarded with the National Dialogue Award. It is an independent organization of Poles living in Lithuania, organizing public discussions and fostering a politically independent dialogue between the Poles and Lithuanians.

Erikas Rutkauskas, a servant of the Jehovah’s Witnesses Community, received the award for the diversity of religions and beliefs. He defended the principle of religious freedom by legal means. The question raised by him was also analysed by the Constitutional Court, which concluded that the clergy of all religious communities should be treated equally in the Law on Military Obligations. After the ceremony, the exhibition “Faces of Diversity” was opened in the lobby of the Royal Palace, which presents pictures where amateur and professional photographers have captured daily lives of various people and their unique moments. Later, this exposition will be shown in 35 Lithuanian municipalities.

The National Equity and Diversity Awards are organized by the Office of the Equal Opportunities Ombudsperson together with the National Forum on Equality and Diversity. This year, the Open Lithuania Foundation, the British Council in Lithuania, the Embassy of the Kingdom of Norway and the Nordic Council of Ministers Office in Lithuania also contributed to the organization of the prizes. The video of the event can be found here.