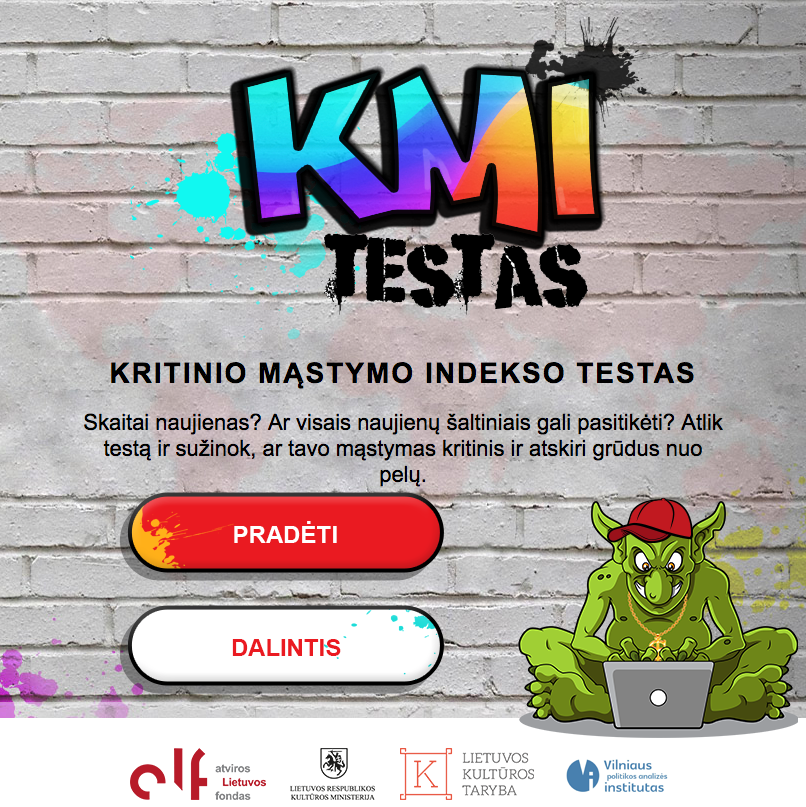 How to manage information overload? How to know what’s hidden behind the news headlines? Who’s the liar? What stereotypes dominate in the media? How to understand the media critically? These and similar issues have been under focus in some Lithuanian schools since October 2017. The Open Lithuania Foundation (OLF), together with the Vilnius Institute of Policy Analysis (VIPA), launched a programme aiming to deconstruct fake news. Supported by the Lithuanian Culture Council, two lecturers and VIPA experts Algirdas Davidavičius and Donatas Puslys as well as Marta Gadeikienė, a programme manager at the OLF, have prepared and presented lesson plans for schools. They provide a methodology that will allow teachers to include critical thinking in their curricula.

By strengthening people’s ability to critically evaluate and use the information provided in traditional and new media, resilience to fake news can be developed. This is the purpose raised by the programme developers. This training programme is directed towards schoolchildren in upper grades in five minority schools in south-eastern Lithuania, the Third Age University, visitors of public libraries, teachers and non-formal education educators.

In October-December 2017, four focus group discussions were held with teachers and pupils (Čiūžakampis Gymnasium in Šalčininkai district, J. Sniadeckis Gymnasium in Šalčininkai, St. R. Kalinauskas Gymnasium in Nemėžis, and St. John Paul II Secondary Gymnasium as the control school). The focus groups were attended by 22 teachers and 44 pupils. The teachers emphasized the lack of educational content and teaching materials in the literary Polish language (especially historical materials that would focus on interethnic harmony, but also adaptations of common life). They also expressed the need for special measures such as student-based media and theatre/cabaret projects. The students emphasized the underuse of contemporary forms (especially youtube and videoblogs) and the need for adaptations of popular media (info animation, video comments and rapbattles) that would reflect contemporary economic, social and civic life. Young people in remote rural areas highlighted the lack of content in the local dialect (non-literary Polish).

Six lesson plans have been prepared. They reflect not only the educational needs of teachers and schoolchildren as they were expressed in the focus groups, but also the new developments in fake news deconstructions published in social media. Demonstration lessons have already taken place in J. Sniadeckis Gymnasium in Šalčininkai and St. R. Kalinauskas Gymnasium in Nemėžis. Visits to Nemenčinė, Trakai, Lentvaris and Čiūžakampis are currently being planned.

“We started visiting schools to share our experience on how to develop media literacy skills and to supply teachers with tools that would help students become informationally literate. We are pleased to have met inquisitive students who are open for discussion and have a lot of questions, who encourage us to develop and search for the most innovative ways to convey the same core content. I believe that this program will help build bridges between different communities and create the climate of trust,” said Donatas Puslys, one of the program developers, editor of Bernardinai.lt and an expert at VIPA.

The purpose of the lesson plans is to stimulate pupils’ reflections on how the media shape our perceptions of events and reinforce different stereotypes about gender roles, nationality and religion, and how our identity and history are exploited in the media. The lessons develop students’ critical thinking and their critical attitude towards media information. Pupils raise their awareness of the tactics of disinformation and propaganda and learn to recognize them.

The lesson plans are most suitable for civic education or history classes, as they aim to foster a reflective view of historical narratives, thereby fostering civic dialogue and creating an inclusive civic space in which different identities can be found. The duration of the demonstration lesson is 45 minutes. The course involves not only the interactive lesson itself, but also a presentation of the methodological plan for each lesson, which later can be adapted by the teacher(s) according to the needs of their classes. The lessons are for senior school pupils starting with grade 8.

To reach the University of the Third Age and visitors of public libraries as a separate target group of the project, two live broadcasts were made (on 20 February 2018 and 6 March 2018). The focus was on how disinformation functions and what role the media plays in disseminating or disclosing it. VIPA experts Donatas Puslys, Simas Čelutka and Algirdas Davidavičius and cultural policy analyst Skaidra Trilupaityte participated in the live broadcasts. Broadcasts were watched in about 200 Lithuanian libraries.

The OLF also developed the Critical Thinking Index Test, which was presented at the festival “Exactly!” in 2017. The test was adapted for young people, uploaded online and presented in the form of a quiz where the users could receive the bachelor’s or master’s degrees of a troll or an elf.

The test (http://bit.ly/KMItestas) received a lot of attention and comments in social media. 10,867 test views were recorded, and over 7,400 respondents completed the questionnaire. Out of these, 67 percent were women and 33 percent were men. The majority (60%) of those who completed the test were between the ages of 24 and 34. It’s also pleasing that there were some respondents over the age of 65. The questions were answered by residents of Vilnius, Kaunas, Klaipėda, Šiauliai, Panevežys, Alytus, Jonava, Mažeikiai, Marijampolė, Elektrėnai, Utena, Tauragė, Palanga, Kaišiadorys, Visaginas and Molėtai. The results show positive trends: Facebook users do think critically and received considerably more bachelor’s or master’s degrees of an elf than those of a troll.

In addition, fake news is being constantly sought, deconstructed and, along with explanatory information, published on the Facebook account of the OLF partner VIPA at #MelųMaišelis (#APackOfLies). Since the launch of the project, 21 news items have been published, each time reaching from 1,000 to 23,000 Facebook users.