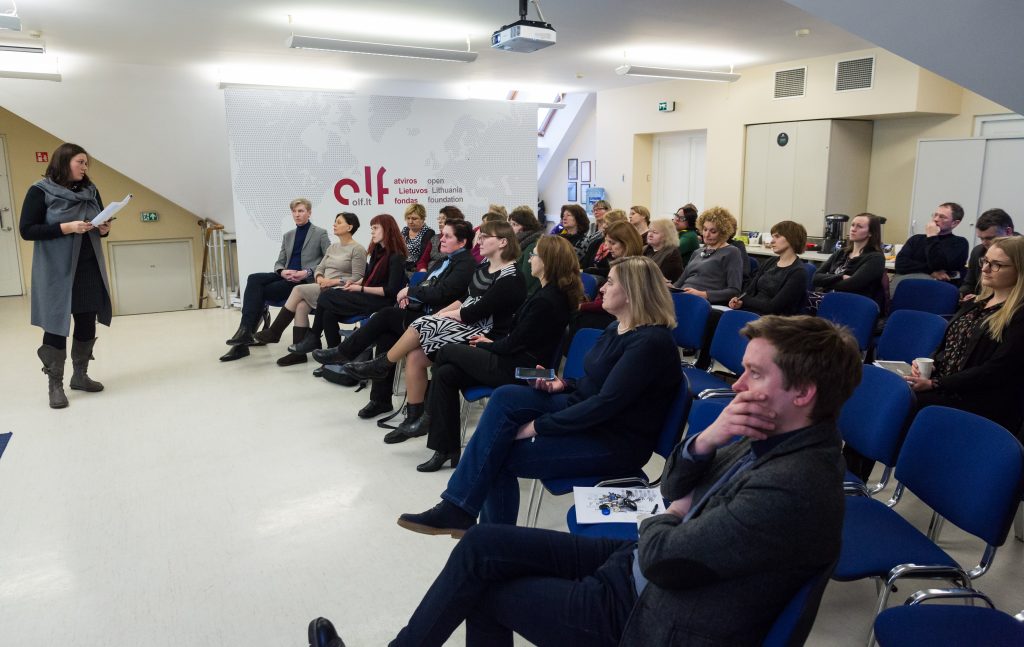 On 8 February 2018, at the Open Lithuania Foundation, 40 NGOs discussed the establishment of an NGO Fund foreseen in the Programme of the Seventeenth Lithuanian Government. The Fund would reinforce the participation of civic society organizations in public politics and would strengthen their capacities; it could be financed annually from the 2% of the personal income tax not allocated to anyone or from the 1% part not allocated to political parties.

At this information and consultation event, the participants were informed about the preparatory work being done to establish the NGO Fund as an integral part of the Ministry of Social Security and Labour (SADM). In parallel, a group of public policy non-governmental organizations presented a comprehensive feasibility study on the need for such an instrument and possible forms of founding it. The study reasonably argues that such a sponsorship instrument should be a separate legal entity, independent of a thematic body. Sponsorship priorities and decisions upon the allocation of financial support should be maximally independent from policy-making processes and political changes.

During the meeting, many participants expressed a strong opinion that the independence of such an instrument from political change was necessary. In view of the current practices of how support is allocated, the NGO Fund at the Ministry could not guarantee it in any way; it would not be able to organize transparent distribution of funding, and there would be a risk of having yet another instrument of mediocre quality that would not cause a more serious breakthrough. A separate legal entity would have a much better chance of ensuring transparent funding, although it would take much longer to set up such a mechanism, since decision-makers are now moving towards the creation of an NGO Fund at the Ministry.

There were also arguments in favour of the NGO Fund established at the Ministry: since there is a clear political will to support this form, the instrument would emerge faster. In any case, the discussion underlined that the structure of the instrument, its decision-making processes and prioritization processes should be maximally independent. Participants of the meeting also suggested broader consultations on this topic with the NGO community.