In Search of the European Idea 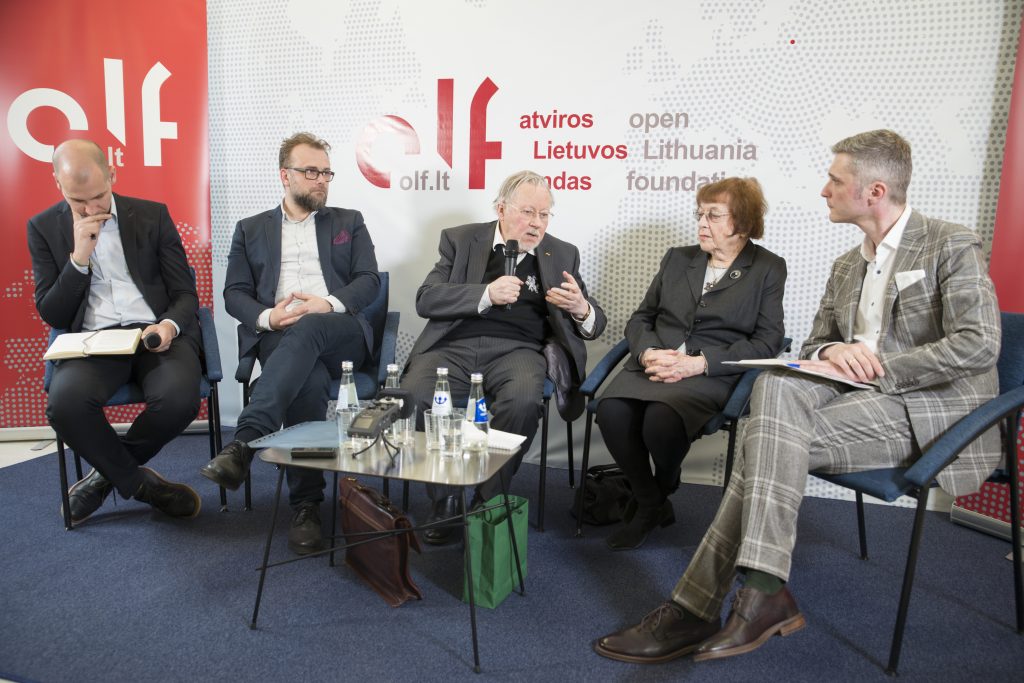 The discussion “The Fate of the European Dream” was held on April 27, the participants of which included the German philologist and theatre expert Irena Veisaitė, historian of politics, music, art, and culture Vytautas Landsbergis, journalist and writer Rytis Zemkauskas, Chief Editor of the daily “Bernardinai” Donatas Puslys.

The discussion was moderated by Aurimas Švedas, a cultural historian, who not only initiated this discussion, but also proposed to use professor Vytautas Landsbergis’s quote “It’s time to speak clearly and outright” from his article “Anti-Europe” (LT: „Antieuropa“, 2014) as a unifying slogan for a whole series of discussions entitled “In Search of the European Idea”. A major problem nowadays is that when speaking about the current situation in Europe we do not call things and phenomena by their real names. What does it mean to be a European in everyday life?

Moderator Aurimas Švedas was prompted to raise this question by Irena Veisaitė’s words in her story about her life in the interwar period in Kaunas (captured in the book “Life Should be Transparent”), where she states: “My parents were Europeans”.

During the discussion, when reconsidering this idea, Irena Veisaitė developed the topic of cultural affiliation of Kaunas inhabitants to Europe in an effort to identify who created the European identity of the person at that time and highlighted the importance of Jewish-Christian values.

Meanwhile, as a person residing in the 21st century, writer and journalist Rytis Zemkauskas discoursed on his relationship with Europeanisation by emphasizing the significance of everyday life and work: “By getting up every morning and doing what I can do best, I contribute to the creation of Europe’s daily routine”.

According to the writer, the routine (environment and culture of communication) that surrounds us reveals best the signs and connections that define our European identity, which requires from us constant attention and efforts.

Where do individual European borders begin and where does the centre lie? “What is most important is you and your relationship to the place you have always called Europe”; these words of Rytis Zemkauskas became the starting point for Donatas Puslys’ self-reflection. “For me, Europe started in the backyard of a block of flats in Panevežys when I was chasing the ball wearing a T-shirt of the Munich Bayern football club player Mehmet Scholl that I had bought in the market. That was when I realized I was something that crosses the boundaries. Europe started for me in Panevėžys,” said Donatas Puslys.  However, according to him, it is impossible to perceive one’s identity without visiting the big cities of Europe. The education of one’s self is also taking place with the help of great Europeans, such as Goethe or St. Francis.

Having made this last insight, the chief editor of Bernardinai recalled the words of the director of the Borderland Foundation Krzysztof Czyżewski: “The center of the world is where you are.” This Jewish proverb reminds us that we are building our Europe wherever we are, using the building materials received through personal encounters with the great cities and towns of Europe. According to Donatas Puslys, this “individual European construction” creates its diversity, which can be grasped best when travelling by train.

Why Central Europeans in the 21st century Europe do not always feel at home? When speaking about people’s self-perception in Central Europe in the 21st century, Rytis Zemkauskas referred to a paradoxical situation: “We felt like the Europeans when we saw strangers coming in the Soviet Army tanks. On the other hand, we also shaped ourselves according to the expectations of those newcomers. Because they considered us as “Europe”. And now we need to deal with reality and try to understand it. Problem solving techniques often involve conflict in this case. Maybe radicals in Hungary or Poland, in a sense, are taking action in “problem solving”, only that they are doing it in a destructive way? On the other hand, maybe some of the perceptual stereotypes really have to be abandoned?”

According to Professor Vytautas Landsbergis, many problems of the Lithuanian society in developing their relationship with Europe are related to the misuse of concepts. According to the politician, one example of such misleading thinking and misconceptions following from it is the widespread notion of “returning to Europe”. “We do not need to return anywhere. We are in Europe!” Wrong thinking imposes the misconceptions of being “not mature enough”, being “unprepared”, or “not beautiful enough” if compared to the “true Europe”. According to V. Landsbergis, by employing such categories, we not only complicate our lives, but also offend citizens of Western Europe.

The temporary political partitions of Europe did not make people different. We must understand this because the change in thinking is perhaps the most important precondition for solving all problems. Why should we consider very carefully the vision of the Union’s development as proposed by the EU political elites?

The discussion referred to the thought expressed by historian Timothy Garton Ash in his book The History of the Present (1999): “No other continent is so obsessed with its own search for meaning and vision. Idealist and teleological visions perform two functions: defining European membership and at the same time seeking to legitimize the European project itself.”

In considering which EU political elite’s vision of a possible further development of the Community is currently dominant, it was noted that “an average European citizen” is generally expected to decide which of the two alternatives is more acceptable to them: “more Europe” or “less Europe”.

When analysing the latter distinction, Donatas Puslys pointed out that it is flawed, since it proposes EU citizens to choose between “both … and” and “either … or”. In other words, one is urged to juggle two extremes, and at the same time this distinction obstructs the perception of the simple truth: political life is life in constant tension, which involves constant thinking about possible choices and their consequences.

The discourse “everything or nothing” is very dangerous; therefore, according to D. Puslys, we should abandon such categories. They are destructive not only when considering the EU future, but they also destabilize the status of different European societies in addressing a wide range of issues. While critically reflecting the “either… or” dichotomy in the EU elite’s political discourse, Rytis Zemkauskas identified another important aspect, i.e. the psychological factor.

According to the presenter, top politicians such as the European Commission President Jean-Claude Juncker are in control of a very complicated sociopolitical and socio-cultural mechanism. It requires new thinking and eventually a lot of sensitivity and … patience. “No one has got patience to wait!” concluded Rytis Zemkauskas. Why is the process of creating a pan-European identity so complex? When assessing the situation, Professor Vytautas Landsbergis noted that the current EU political elite has a distinct mythology, which for many is not understandable or acceptable.

According to the politician, one of the key aspects of this mythology is the desire to create and to impose a European identity. However, such acting can hardly result in success, since European identity is getting shaped by itself, and its formation from the top gives rise to resistance. Moreover, the concept of European identity itself is not filled with meaning.

Universal Europeanism, according to Vytautas Landsbergis, “is not yet mature”, and its reckless promotion is useful for Eurosceptics. Sometimes we hear voices that “they want us not to be Czech or French anymore”.

Irena Veisaitė contributed to the discussion by noting that in this case it is very important to answer the question clearly: “Does the European Union pose any threat to national identity?” According to Irena Veisaitė, the European Union emphasizes its anti-nationalist position, but at the same time it is very attentive and sensitive to cultural diversity. After all, the Brits who voted for Brexit were not afraid to lose their identity; they protested (according to their own words) against the desire of Brussels to impose their will in the political and economic spheres.

Regarding the process of forming a pan-European identity, D. Puslys pointed out that the underlying problem of multiculturalism is the contentment of officials that something is happening, without realizing that the social fabric enabling different people from different cultures to be close to each other and engage in dialogue is not a hotel room which one may leave at any time (“If I don’t like it, I pay and go!”); instead, it is a certain determination and commitment to act.

Has the European dream broken? In their attempts to answer this question, the participants identified a large number of reasons for political, social, economic and cultural planning, which led to very heterogeneous processes that are now being experienced by the European Union. What should we do to refine the European idea that would respond to the realities of the 21st century? What content and momentum should we give to the European Union project? Consideration of these and other issues of paramount importance will continue throughout 2017 at the discussions “European Idea Search” at the discussions “European Idea Search” at the Open Lithuanian Fund.