Simona Merkinaitė / Democracies in Revolt. Rethinking 1989 and the Future of Democracy 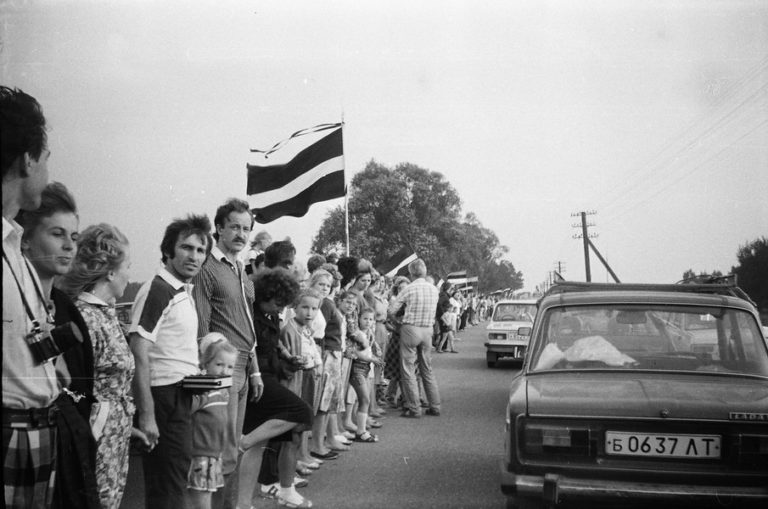 The history of 1989 shows that acts of civil disobedience are at the forefront of the revolution.

Thirty years after the democratic revolution and massive civil disobedience actions swapped the region of Central and Eastern Europe leading to the collapse of the Soviet Union, the young democracies are facing new challenges. Rollback in democratic rule, assaults on civil rights, justice systems and free press in the region mixed with a general dissatisfaction with the political elites and disinformation fueled polarisation results in the idealisation of 1989 as a moment of unity for democratic future.

Yet, this nostalgia towards the past constrains us from seeing the systematic challenges for democracy laid back in 1989.

Between personal liberties and political freedom

“No cause is left but the most ancient of all, the one, in fact, that from the beginning of our history has determined the very existence of politics, the cause of freedom versus tyranny”. Hannah Arendt wrote these words in response to the Hungarian Revolution of 1956. The events in Prague inspired hope that the tyrannical machine will be dismantled from within by the freedom longing people.

This drive towards freedom took hold of Central and Eastern Europe in the late eighties and the beginning of nineties. Yet, Ardent warns in her book On Revolution against equating the fight for liberation with freedom of the people and draws the line between political and non-political motives for civil disobedience and uprising. These differences impact the quality and prospects of the free government of the people for the people.

Liberation signifies the uprising of the people against the oppressive rule of the tyrant. In the citation above, Ardent insists that the human urge for freedom will outgrow all the ideological divides, religious stances or political opinions and unify the masses against the oppressor. Indeed, the opposition to the Moscow rule was the unifying force behind mass mobilisation unifying people with radically different ideas of what life in freedom is supposed to look like.

What “makes” a political revolution is an afterthought that is given to the new form of government, as freedom in strictly political terms means self-rule, (re)creation of the polis. Liberation is the condition of freedom, but by no means lead automatically to it. Liberation can mean as much as getting out from under the rule of X to life under the rule of Y, hoping that the Y, put into the position of power, somehow will be better than X.

Today, significant proportions of political support for leaders who show disregard to the rule of law, democratic process, yet display an image of the “all-knowing leader to resolve all the problems” show the reluctance to move towards self-governance in the polis. It rather signals that the good old soviet style of nepotism and clientelism is still considered normalised conduct of politics.

In addition, social motives constitute a rebellion against the impossible living conditions, when everyday life is paralysed by these living conditions. The dissonance between the promise of (literally!) social revolution and reality, where most people struggled to get by, definitely played a massive part in the revolt of the masses.

The socialists promised prosperity and freedom, but people found themselves in economic struggle and ecological catastrophe as a result of “socialist way of modernisation”. The coalition against organised lies at the expense of wellbeing on all levels is a great force capable not only to mobilise but to build mass anger.

However, once economic freedoms are ensured and social wellbeing reassured, many people retreat from the public sphere, and politics loses the personal connection. After all, defending the system of justice or political institutions is a dull business. Seen in this light, a revolution driven by the social needs of the people is not sufficient enough to preserve democracy.

Those who are driven by social motives are inclined not to care how the business of government is conducted, as long as they are left alone to live their own lives in private. This is evident by the consistent improvements in standards of living across the region, despite the current surge in anti-democratic political leadership. Living in a democracy, the crisis is unavoidable, when the importance of self-rule and the democratic process itself is lost on the citizens.

The deception of the unified nation

The year 1989 and the following movements for liberation across the region are often recalled with a certain amount of nostalgia as the events signify the miraculous affirmation of the nation. In reality, the nationalist sentiment found fertile ground in the region, as many of the Central and Eastern European societies emerged from the Second World War more homogeneous than ever before. The late socialist governments are the ones that promoted the nationalist sentiments, through the celebration of national folklore and narratives served as an antidote to failing ideology of socialist internationalism.

This is how the democratic principle, “one person – one vote” loses all meaning and pushes the public space into the most extreme form of identity and hostility politics when identification with a certain group becomes paramount in politics and the only antidote is another group identity. Needless to say, a meaningful political debate becomes virtually impossible.

It also explains how the past and history is being turned into the most urgent question of today. The resilience to historical truth is fueled by rhetoric to protect the identity and the existence of the nation and history became a battleground for politics in virtually all the counties of the region propelling the leaders posturing as protectors of the nation. The fights over the memory of the heroic, “wronged nations” in Lithuania, Poland, Hungary at the expense of historical truth is seen as a necessary sacrifice to maintain the “freedom of the nation”.

Understandably, the people will be more included to sacrifice the freedom of the press, rules of transparency when they feel existential thread by the revision to the narrative of their identity. As a result, initiatives like the one to restrict language permitting talking about Lithuanians as perpetrators in Holocaust find their way into parliament, obliterating public discussion and consultations with historians; this is how in Poland the historians were repeatedly forced out of their positions (including Dariusz Stola of the Polin Museum, or Pawel Machcewicz of the Museum of the Second World War).

Citizens are willing to accept the anti-democratic shift as long as at least parts of the citizens have something to gain from the strong leader or their political allies in power, or as long as they feel represented. It is indeed a retreat to the politics of “the goal justifies the means”.

The support for democracy, in this case, is rather accidental, surging when the leaders in power respond to specific needs and wishes of the specific groups at best, fueling anger, hostility and isolation when the civilised debate among citizens seems to be out of reach, at worst.

Politics is being perceived as a zero-sum game, which inevitably puts democracy, a political system, that relies on a certain amount of goodwill accepting the radical difference in life choices and opinions, in peril.

The politics of high and low stakes

At the same time, in the context of all the challenges the democratic rule faces today, 1989 has valuable lessons to learn – the meaning and impact of the political action.

The history of 1989 shows that acts of civil disobedience are at the forefront of the revolution. The simple acts of disobedience, break in the everyday routine set in motion by the totalitarian rule, such as putting up the socialist slogans is how, as Václav Havel would way, the power was reclaimed by the powerless. Non-violent civil disobedience tactics, like of Solidarność made a significant difference.

At the same time, each act of civil disobedience under Soviet rule implied extremely high personal stakes. The political act implied the commitment to freedom at the expense of personal security, wellbeing or life.

Today, in the constant noise of the public space, with minimum to zero accountability for words, meaningful political protest become harder and harder to achieve. The social media, smartphones and 24/7 connection to the world provide a platform for civil disobedience and civil engagement, yet, technology has become not only a conduit for surveillance and manipulation and division but also replaced politics of high stakes with political and moral posturing.

Instead of getting out of the house, joining civil or political rights movement, participating in the government consultations or supporting independent media, the polis has moved into a virtual space.

In 1989, the Baltic chain across all three Baltic states was organised by collective effort, that remained outside the public eye. As people, especially outside metropolitan cities, recall, the organisation of the chain spreading 650 kilometres, needed precise organisation when everyone from neighbours to priests in small town perishes placed immense trust in each other.

Largely it was possible because people maintained personal ties. Something that is challenging for online gatherings. Smartphones and internet provide an opportunity for self-organisation beyond anything known before in scale and speed, yet it seems there is a shrinking space for meaningful political action, doubled with the lack of trust in the civil power and each other.  Social media also provokes a false sense of engagement in politics. It is not enough to voice opinions which due to lack of personal encounter turn into insults and harassment.

Online movements against global climate change and for the respect of animal rights, they all turn into causes of self-righteous moralism when unaccompanied by the real actions and personal life changes. Online political activism can co-exist with the actual lack of political engagement.

The idea and practice of the polis have to be rediscovered in the digital age in order to preserve the self-rule of the people.